Microblading is one of the most trendy treatments and has seen a huge spike in demand. With many beauticians getting their formal training to perform the procedure, microblading can enhance the appearance of eyebrows by applying a semi-permanent dye to the eyebrows to help them appear fuller and more defined.

However, as with all procedures, there are some risks that you should be aware of before you make the decision to undergo the treatment.

As microblading incorporates some elements seen in tattooing when it comes to the application and aftercare, it’s important to educate yourself so you can have a better understanding of the treatment and how to prevent any side effects.

Can Microblading affect your eyes?

Microblading can affect the eyes if it is not done correctly due to the sensitivity of the skin around the eye as well as the eye itself. Allergic reactions can be spotted easily as the skin will usually become inflamed and redden in color.

There may also be some swelling in the brow area and along the brow bone. It can resemble a burn as the skin has rejected the ink and this can happen a short while after receiving the treatment.

Severe reactions can lead to serious irreparable damage such as eye loss because of how close the procedure is to the eye. As formulations for microblading change over time, the skin may develop certain sensitivities against newer formulas if they are more aggressive.

The FDA have issued warnings against permanent eyelash and eyebrows tints and dyes as they have been known to cause injuries and conditions such as blindness. However, the FDA cannot regulate salons meaning that they are not entitled to ban such products.

In the case of salons, the state and local government of the salon creates the rules and regulations regarding using the tints and dyes. For example, the state of New York allows eyebrow and eyelash dyes in salons that are not fully permanent whereas the state of California warns that salons will be cited and fined for using any tinting products.

Be sure to look up the local laws for whatever state the salon is in and make sure that they are adhering to them.

It’s important to bear in mind that Microblading is more likely to affect the eyes if the procedure is performed by someone who has not received or completed their formal training or people who have extremely sensitive skin that is prone to allergic reactions or inflammation. Washing your face after microblading and not using proper care can also make it more likely to affect your eyesl..

Always request a skin test if possible or ask the beautician to start slowly to see if any inflammation occurs. 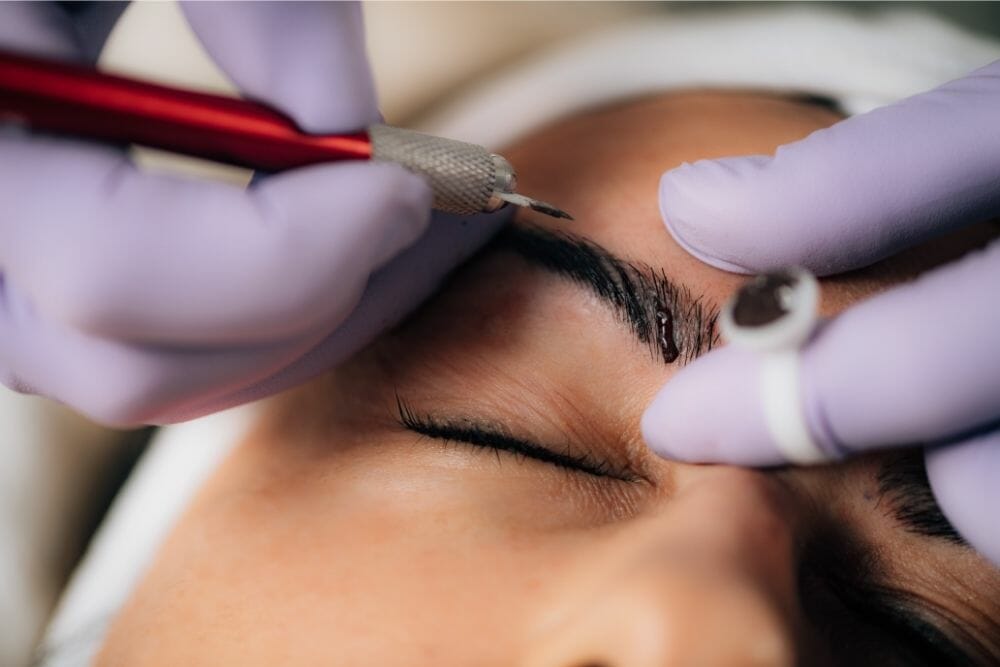 Does Microblading have side effects?

Aside from any allergic reactions and their subsequent fallouts, side effects are actually uncommon in Microblading when the procedure has been done correctly and all of the health standards have been followed in terms of disinfection and sterilization of all equipment used.

A lot of side effects can be caused due to a lack of education of the aftercare that needs to be followed carefully to prevent any risks and damage from occurring.

The Microblading process is similar to tattooing in terms of the application and aftercare. What Hurts More: Tattoo or Microblading?. Whether any side effects occur depend on how well the individual is willing to look after their eyebrows in the aftermath of their procedure.

There are some tips that you can follow such as gently washing the eyebrows with a fingertip and using a mix of antibacterial soap and water for around 10 seconds before rinsing and patting dry.

Make sure that you use as little moisturizing ointments on the eyebrows and surrounding area as possible as well as avoiding makeup in that area until it has fully healed.

If possible, try to keep your eyebrows away from water for 7 to 10 days which includes showering or swimming. How fast do eyebrows grow back?. This will help to maintain the dye and stop it from fading.

Also try to avoid direct sunlight or tanning for around 4 weeks as this can cause inflammation in the skin as it will still be healing due to the procedure.

Another tip is to avoid using any facial scrubs and peels for 4 weeks after the procedure and do not pick at any microbladed eyebrow scabs as the skin is healing.

Lastly, do not sleep on the face for around 10 days afterwards as this can cause a lot of irritation to the affected area.

In conclusion, there is a reason why microblading remains one of the most popular treatments that only shows signs of further demand. How do I get rid of Microblading at home?.

With many people swearing their loyalty to the procedure, it can help to bring that definition you’ve always dreamed of to your face as well as filling in any gaps and giving a more consistent and even shape that tweezing, waxing or threading doesn’t always give.